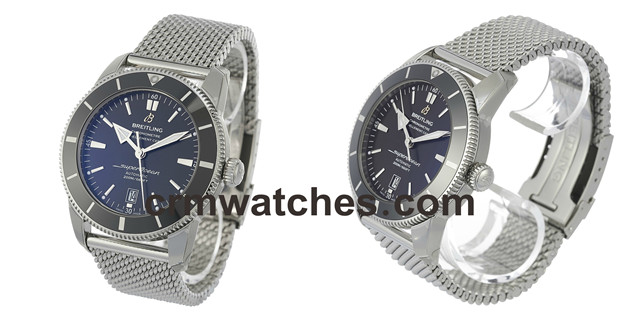 Half a century flight legend

Founded in 1964, this exceptional aerobatic team consisted of professional Air Force pilots. It was developed to six in 1978 and has begun to emerge internationally. Since 1995, the “Swiss Patrol” has become one of the few fleets of aerodynamic jet fighters performing aerobatics: six American F-5E Tiger II fighters whizzing through the air, red and white figures are dazzling. As a model of precision and excellence in Switzerland, the Swiss patrol regularly toured in various European countries, and its incredible stunt performances have won them a lot of spectators and countless honors.

As the world’s most trusted partner in the aviation industry, Breitling maintains a long-term close relationship with the “Swiss Patrol” aerobatic team and has launched a series of tailor-made personalized watches on this benchmark. The two-way rotating bezel engraved with a 24-hour digital scale can also provide a third-time zone reading; The 50th-anniversary logo of the beautifully engraved engraving team on the back cover. It has the official Swiss Observatory certification (COSC) – the highest benchmark for precision and reliability, and the only certification based on international standards. Rugged and reliable performance with a masculine high-tech look: a timepiece that pays tribute to the half-century flying legend.