In this watch test feature from our December 2008 issue, writer Jens Koch and photographer Nik Schölzel pit modern versions of two iconic 1970s chronographs — the TAG Heuer Monaco and the Breitling Replica Chono-Matic — against each other in a challenge of retro sports watches.

The generation that came of age in the 1970s loves to revisit its memories of that time. And because the youths of those days have become the heavy-hitting customers of today, many things that were popular then are experiencing a rebirth. The success of the new muscle cars and the return of the Lava Lamp are proof. In the 1970s, watches — like men’s ties — were large and colorful. Experimentation with shapes and dimensions was the norm, and we see this trend emerging again today. It’s no wonder that we’re seeing models from the “Me Decade” reissued in a more or less revised form.

As different as our two test watches appear at the outset, they do have a common origin that begins in 1969. That’s when the first automatic chronograph movement, called Caliber 11, was introduced, launching a new age. The ébauche manufacturer Büren Watch supplied an automatic movement with a microrotor for which Dubois Dépraz provided a chronograph module. Two watch companies, Breitling and Heuer (predecessor of TAG Heuer), provided financing and aided in developing the technology. It was fitting that these firms were the main beneficiaries of Caliber 11. The first watches with this movement — the predecessors of our test watches — appeared that same year.

Like other watches with this automatic chronograph movement, they were easy to spot: their crowns were on the left side of their cases, opposite the pushers. Operability won out over nostalgia in the new versions: both have their crowns in their traditional positions on the right side.

In other facets of their outward appearance, however, both brands’ watches remained true to their predecessors. TAG Heuer retained its rectangular contours with gently curved flanks. At first glance the Breitling’s case appears to be an oval, but it is actually an octagon. Even the sizes of these two watches correspond almost exactly to the original versions that were introduced 39 years ago. This is particularly surprising for Breitling, since even by today’s standards the diameter of 49 millimeters is enormous, exceeding the earlier model by only one millimeter (assuming the Chrono-Matic Ref. 1806 was used as its base model).

From this direct predecessor, the Chrono-Matic 49 tested here distinguishes itself in particular with its size (reflected in the name of the model), the repositioned crown on the right side, and a price that is almost $2,700 higher than the TAG watch. The new version also has a 12-hour counter at 6 o’clock and a rubber-coated bezel. The bezel on the 1969 watch was also black, though then it was blackened steel. At that time, Breitling Replica Emergency introduced the model as a modern interpretation of the famous Navitimer pilot’s watch, and like this watch it had a slide rule that was not directly moved by the bezel but by a gear within the case. This feature has the advantage of better handling and a more secure way to seal the case. The dial design was updated without affecting the harmony presented in the original.

TAG Heuer also retained much of the 1969 Monaco. The case shape and size correspond to the original, as does the blue dial design with its two square subdials. Even the hands are the same. Some of the “mod” elements were eliminated, such as the horizontal hour markers that were placed outside the minute track, and red highlights were used more sparingly this time in order to present a more updated design, but there is no doubt about the watch’s DNA. TAG Heuer also offers a more conservative version with a black dial and black subdials.

Like all models of that era from Heuer, the name Monaco was taken from a famous auto race, the Grand Prix at Monaco. The watch’s most famous appearance was in the 1971 film Le Mans, in which actor Steve McQueen wore it in his role as a driver for the Porsche 917 Gulf Team. The Swiss racecar driver Jo Siffert, who led the team in real life, also wore the Monaco. And like the Breitling, the Monaco contained an exciting new movement that, for the first time, united a practical self-winding mechanism with a chronograph and had an avant-garde design that distinguished it from every other watch on the market. Many of these features are still apparent, though more so in the more exotic Monaco than in the Chrono-Matic, whose look is really rather modern.

Both watches present top-of-the-line finishes on their cases. Breitling’s efforts include the rotating slide rule and rubberized bezel. Surfaces are carefully polished, the caseback is engraved and both sides of the sapphire crystal are nonreflective. The oversized crystal makes the Replica Breitling Galactic 44 appear even larger. The Monaco’s curved crystal is made of acrylic, as before, which means it’s quite susceptible to scratching — but a sapphire crystal would have been an extremely expensive addition. TAG Heuer must secure the caseback with screws due to the shape of the case, but the seal would have been tighter if more than four screws had been used. Breitling uses a structurally superior screwed caseback, but specifies the same water-resistance as TAG Heuer (3 ATM), so neither is suitable for swimming. 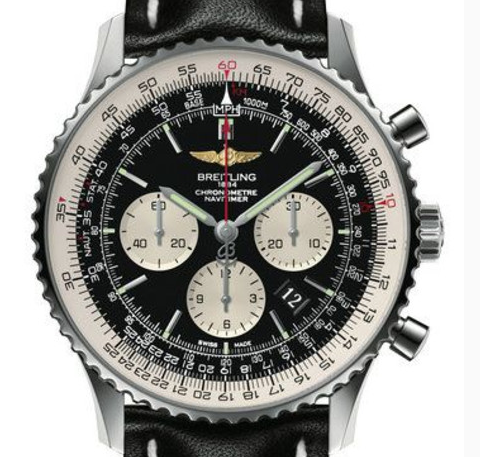 The Navitimer copy watches were designed in 1952 specially for pilots and other aerial professionals. The replica watches are equipped with unique circular slide rules that can handle different calculations during the aviation flight process. Due to the novel, elegant and high-tech designs, they are widely loved by aviation fans, so they are the first choices to be collected by collectors.

Firstly, new Breitling Navitimer 01 copy watches adopt large sizes with 46 mm in diameter, which not only optimize the readability of the data, highlight the originality of design, but also make the watches obvious on the wrists. Besides, the replica watches adopt black dials, and special scales that are created with the exquisite “Epargne” technology, which make the copy watches bright and legible. Moreover, the fake watches can be matched with blue dials and small dials with the same color. Owing to the transparent sapphire backs, the precise operation of the movements can be visible. Furthermore, matched with steel bracelets, leather or crocodile leather straps, the replica watches are special and elegant. 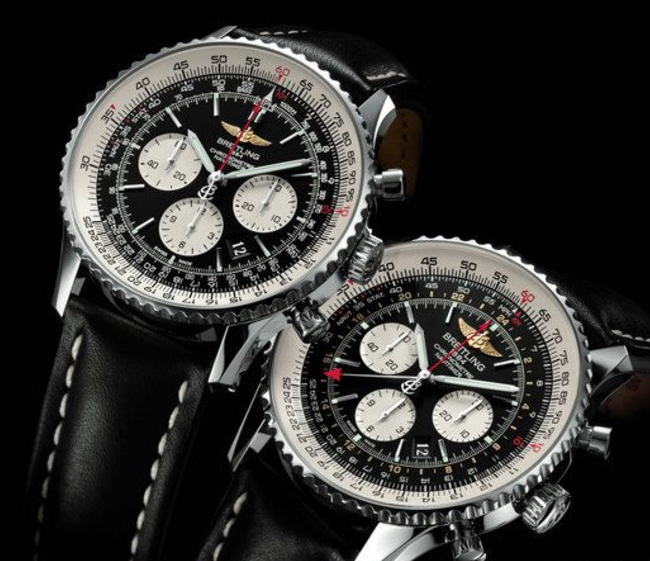 Secondly, Breitling Navitimer GMT fake watches for sale have bold and innovative designs, and they perfectly integrate the spirits of the global travelers into the new watches. In addition, the fake watches provide convenient operation experience for wearers, and they are equipped with B04 self-winding movements that can be seen through the transparent sapphire case backs. Owing to the sizes with 48 mm in diameter, the best readability of the dials is fully guaranteed.

Because of the various styles and excellent functions, the cheap Breitling replica watches are worth owing, and they can be of great use for wearers.